Attention: This page is a reference for users of the original Radio JOVE RJ1.1 receiver.

Users of the RJ2.0 SDR-based telescope can find the web pages for that system by going to radiojove.gsfc.nasa.gov/radio_telescope and following the RJ 2.0 link found there.

The original JOVE RJ1.1 receiver contains over 100 electronic components and pieces of hardware. Fabrication includes the handling of small, delicate, electronic parts, most of which will be mounted and soldered on a printed circuit (PC) board. The receiver is powered by a 12-volt DC supply (included in orders shipped to North America). The RJ1.1 was available both in kit form and as a pre-built unit; it is no longer available. 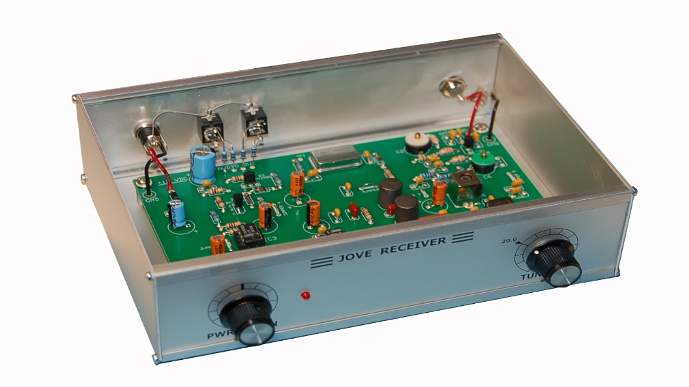 A completely built original Radio JOVE 1.1 receiver with the enclosure lid removed to show the internal parts and wiring.

The antenna kit contained the necessary wire, insulators, power combiner, ferrites, coaxial cable and connectors for a basic dual dipole array. Locally available components such as PVC masts, rope and some hardware were not provided in the kit.

The antenna array requires a reasonably flat area 30 ft N-S by 45 ft. E-W. The soil should be suitable for putting stakes into the ground. Since the antenna is sensitive to electrical noise it is best not to set it up near power lines or close to buildings. For safety reasons, keep the antenna away from power lines during construction and operation. The best location may be a sports field or a rural setting. 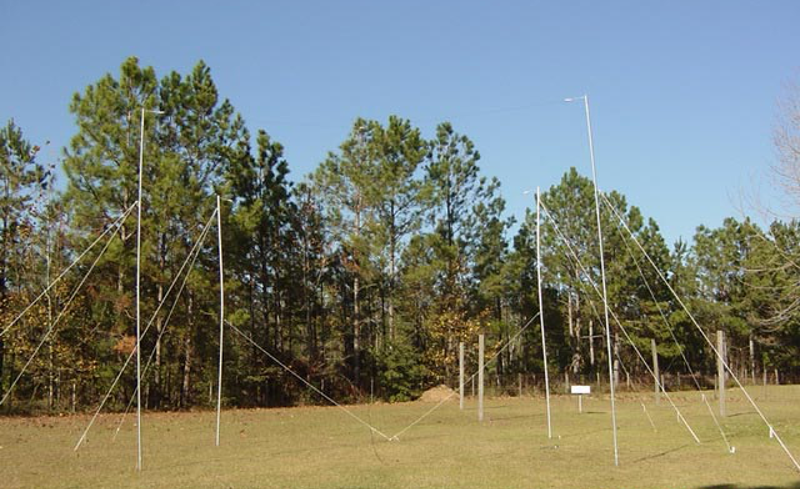 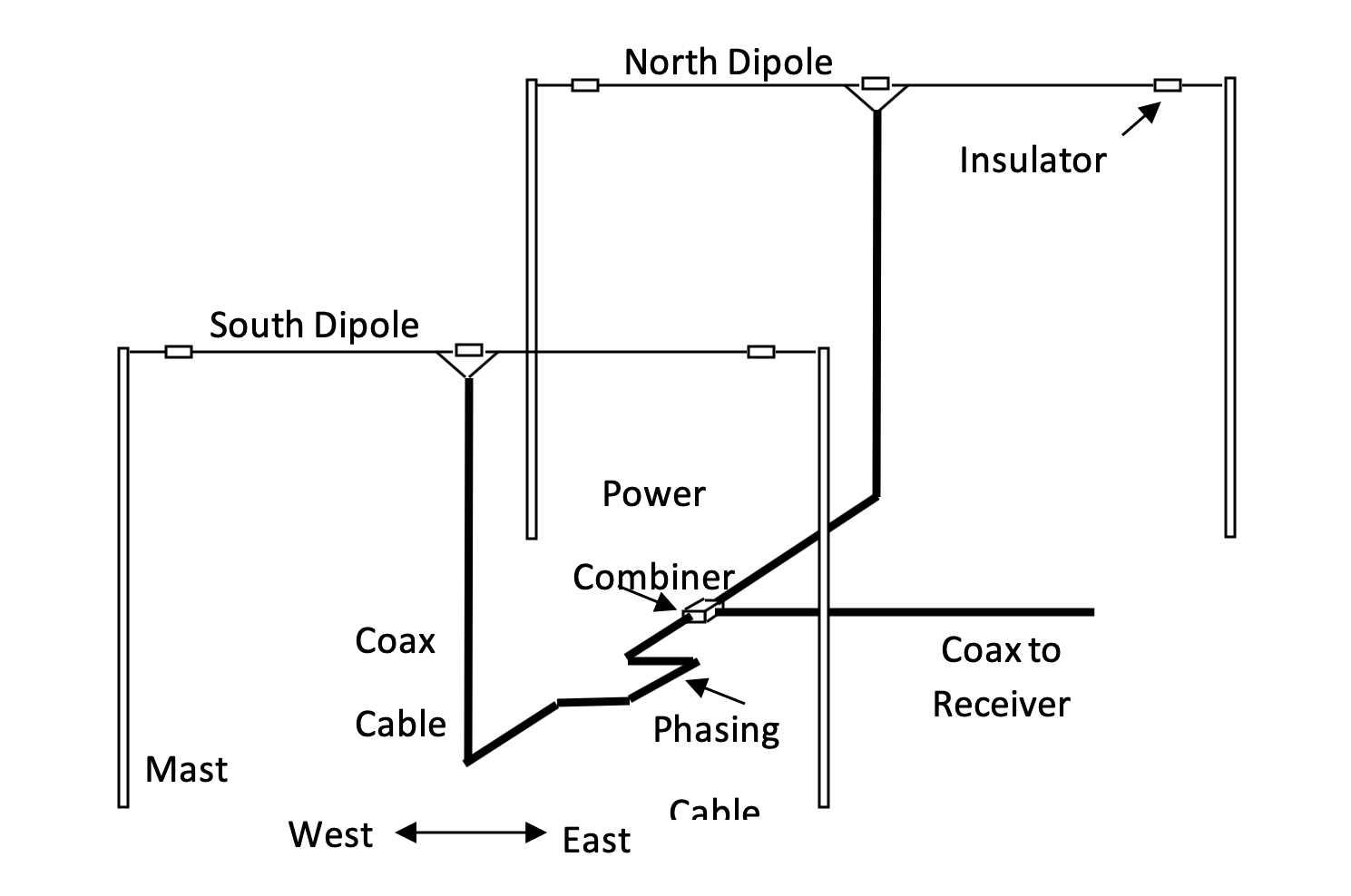 The dual dipole array produces a wide antenna beam that can be redirected north and south through the use of a phasing cable. A celestial source takes several hours to pass through the antenna beam.

An optional calibrator (RF2080 C/F) was available to allow the observer to determine the strength of received signals, thus making observations much more scientifically useful. This prebuilt, calibrated noise source allows users to determine how "radio quiet" your listening site is and also measure the strength of Jovian and Solar radio bursts in terms of antenna temperature. The RF2080 C/F included a filter to help reduce or eliminate strong daytime station interference to the Jove receiver. 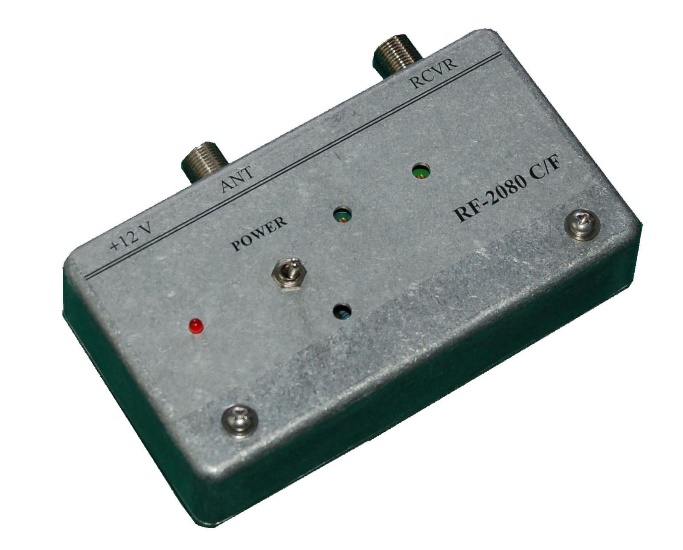 The Radio JOVE 1.1 radio telescope included software (Radio Jupiter Pro) for predicting when Jovian radio noise storms were likely to occur, as well as Radio SkyPipe II, a program that displays signals in a strip chart format (intensity vs time). Radio SkyPipe also allows an observer to stream signal strength data over the internet and view strip charts in real time from remote observers. Radio JOVE software is designed for use on a Windows OS platform of modest capability. Note that the Radio SkyPipe II software does not work on a Mac OS computer. 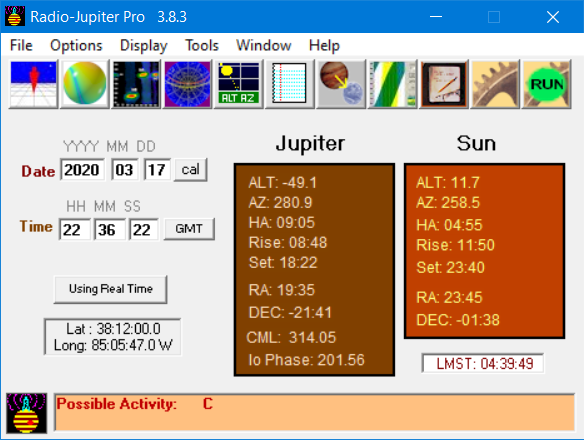 The original JOVE radio telescope kit came with extensive documentation. The receiver and antenna manuals were designed to teach fundamentals of electronics and antenna theory as well as to guide the actual fabrication of the kit itself. These manuals are available online. The book Listening to Jupiter was included with the Radio JOVE documentation. and addressed many useful topics in radio astronomy. 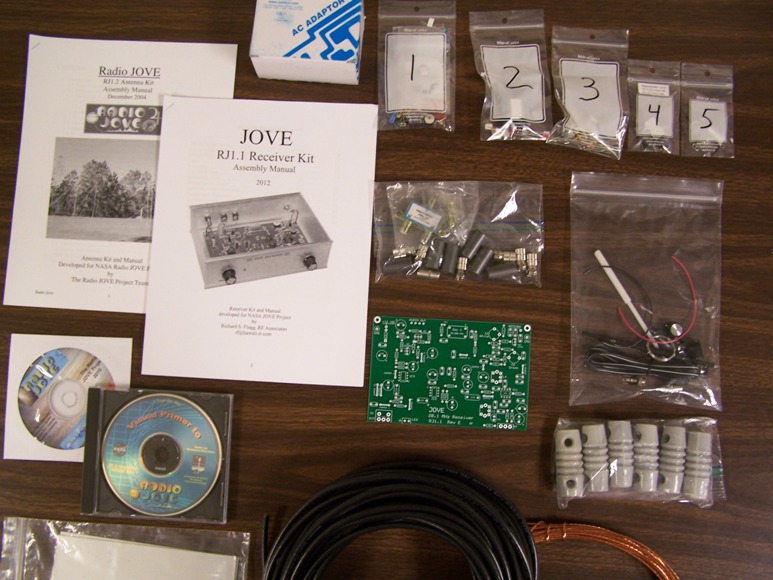 While the JOVE receiver was optimized for short wave (HF) radio astronomy other receivers can be used successfully.

Many ham radio operators and short wave listeners have sensitive receivers and excellent antennas that are suitable for hearing Jovian and Solar radio emissions. One important receiver feature is the ability to turn off the automatic gain control (AGC) circuit.

Jupiter signals are best received in the 18-22 MHz frequency range. General coverage receivers can be used in AM or SSB modes and if you are using a ham band antenna then the 15 meter band is preferred. The AGC, noise blanker (NB) and noise reduction (NR) should be turned off to avoid alteration of the incoming signal.

Many of the new SDR radios may also be used. These radios can produce a spectrograph (waterfall display) as well as an audio signal to drive a SkyPipe strip chart display.

Ham band antennas such as a Yagi, Quad, Moxon, or even a single dipole can work, although the receiving gain of a single dipole is a bit low for all but the strongest Jupiter storms. 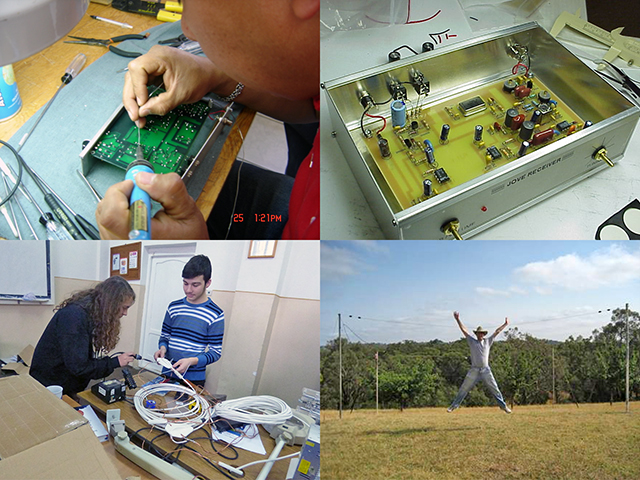